The second quarter gave investors an object lesson in how quickly market expectations can change. Rising U.S. interest rates were the driving force behind the sharp price declines suffered by fixed-rate assets throughout most of the period. The yield on the 10-year Treasury note rose by 83 basis points in the quarter through June 10, before spiking by an additional 28 bps on June 13, after the Wall Street Journal reported that the Federal Reserve was considering increasing the fed funds rate by 75 bps – the largest hike in almost three decades. (See Figure 1.) However, when the Fed followed through with this aggressive move, investors’ focus quickly shifted: the risk of a recession in the U.S. – not rising interest rates – suddenly took center stage. Consequently, the yield on the 10-year Treasury note fell by 45 bps between June 13 and June 30, while yield spreads widened across credit asset classes.1

As we assess recession risk and how an economic downturn might impact credit markets, we’re reminded of something Howard Marks recently wrote in his memo Bull Market Rhymes:

The fundamentals of the U.S. economy have clearly weakened in 2022, as reduced fiscal largesse, tightening monetary policy, and rising prices have weighed on consumption. But these negative trends have been building for some time. What has shifted more dramatically of late is how investors interpret these fundamentals. Such interpretations are liable to remain volatile as long as the macroeconomic picture remains murky. So the road ahead could be bumpy, as we noted in Performing Credit Quarterly 1Q2022. But we believe credit investors with intestinal fortitude and the skill to navigate this landscape could find opportunities to pull ahead of those who are desperately looking for an exit ramp. 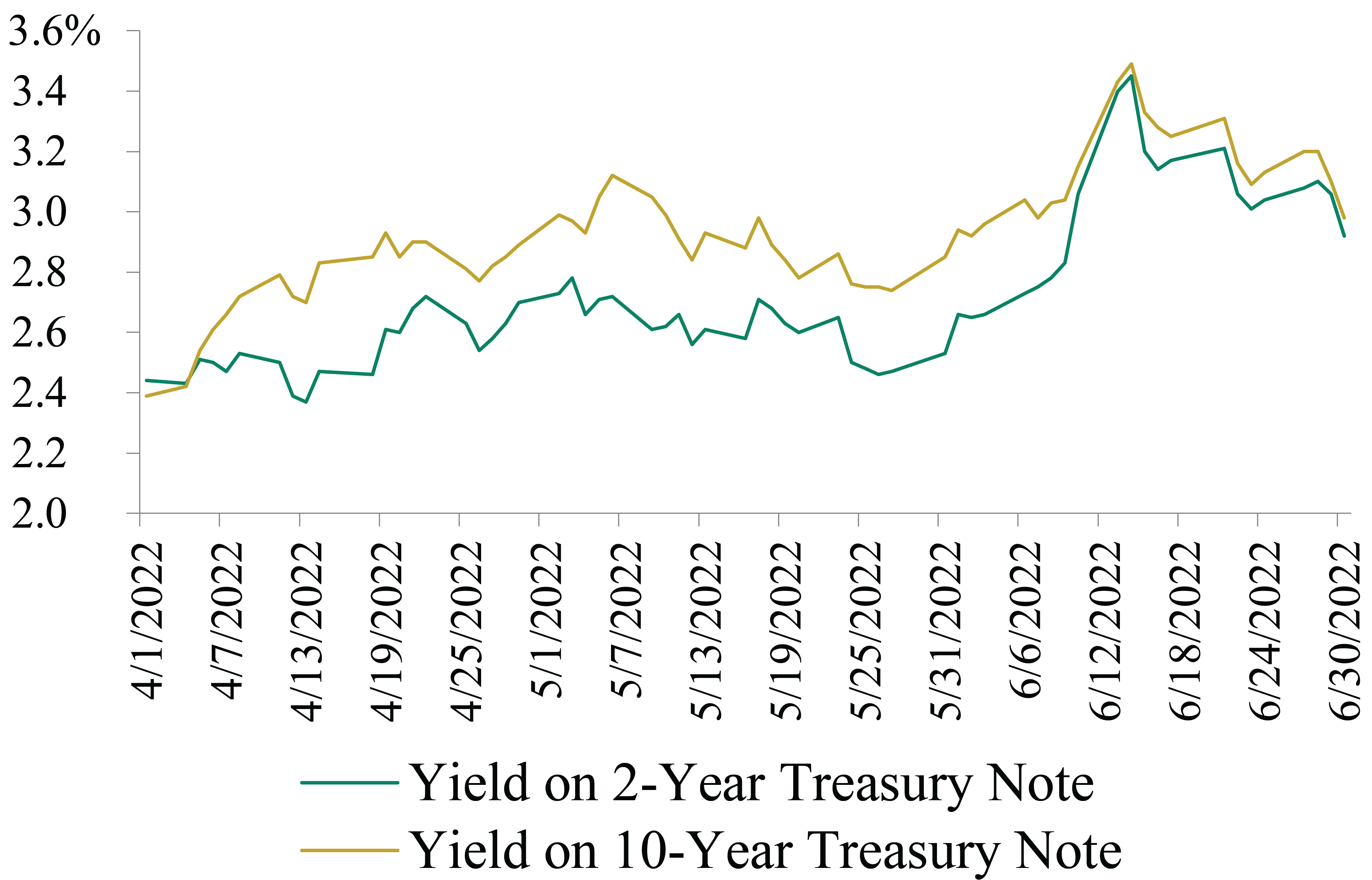 Source: U.S. Department of the Treasury

“A significant decline in economic activity that is spread across the economy and that lasts for more than a few months.”

When assessing the risk of a recession, it’s useful to consider what the term actually means. Many people believe it refers to two consecutive quarters of negative GDP growth. By this definition, the U.S. economy may already be in a recession. The U.S. economy shrunk by 1.4% in the first quarter, and the Federal Reserve Bank of Atlanta’s GDPNow tracker currently indicates that the economy has contracted by 1.5% in the second quarter.

But even if the Atlanta Fed’s estimate is accurate, that doesn’t mean the economy is officially in a recession. NBER (the private, nonpartisan organization that formally decides when recessions begin and end) focuses on the depth, diffusion, and duration of economic weakness when making its determinations. To do this, the organization considers many economic indicators – not just GDP growth – such as employment gains, real personal income, consumption, and industrial production.

So how is the broad U.S. economy faring? Many indicators have been flashing red in recent months:

Another way to identify a recession is the Sahm Rule, which states that a recession has begun when the three-month moving average of the unemployment rate has increased by at least 0.5 percentage points relative to the low in the prior 12 months. By this measure, the U.S. is currently nowhere near a recession. In June, the unemployment rate remained at 3.6%, near the 50-year-low, and the U.S. economy added 372,000 jobs, in line with the average monthly increase of 383,000 jobs in the previous three months and well above the pre-pandemic norm.5

But, once again, there is more than one way to interpret an economic data point. On the one hand, robust job growth indicates that consumers should continue to have money to spend. On the other hand, a tight labor market could produce wage inflation that would pressure the Fed to continue aggressively hiking interest rates. The risk posed by the Fed itself is tremendous, as it has rarely been able to reduce the inflation rate without causing a recession, and it has never done so with inflation running as high as it is currently.

Investors don’t appear to have much confidence in the Fed’s ability to engineer this so-called soft landing. Money markets are indicating that the Fed will raise interest rates significantly in the next few months but then begin cutting them as early as next year, a monetary policy pattern typically associated with recessions. Moreover, in the last 25 years, a recession has often occurred after the expected short-term interest rate in two years has fallen below the expected short-term interest rate in one year. This inversion has recently taken place. (See Figure 3.)

There are many assumptions baked into current credit and equity prices. Investors appear to believe U.S. inflation will slow enough by early next year that the Fed will not only be able to stop hiking interest rates but will also be able to cut them without further eroding confidence in its ability to keep inflation near its 2.0% target. Moreover, both yield spreads in below-investment grade credit and earnings assumptions embedded in equity prices suggest that investors believe any recession in the coming year will be mild. Indeed, high yield bond spreads have narrowed in July, despite recession concerns. Additionally, the gap between yield spreads of European high yield bonds and their U.S. counterparts is wider than average but not enormous, indicating that investors don’t believe the conflict in Ukraine will escalate dramatically. A host of risks could undermine these expectations:

Figure 4: U.S. Equity Returns Have Been Correlated with the Fed’s Balance Sheet Expansion

Source: Board of Governors of the Federal Reserve System, Bloomberg

NAVIGATING THE ROAD AHEAD

At Oaktree, we’ve long believed that some of the best potential bargains can be found in market environments where risk aversion has taken over from risk tolerance. We don’t think this transition has fully transpired, but the tide is turning. Moving forward, we believe investors will be well positioned if they have (a) the ability to conduct detailed bottom-up credit analysis and (b) the flexibility and fortitude to take advantage of attractive opportunities, wherever they arise.

Yield spreads in the U.S. high yield bond market widened by more than 260 bps in the first half of 2022 to reach almost 600 bps, reflecting investors’ increasing pessimism about the economic outlook.9 Breaching 500 bps is noteworthy, as doing so has historically signaled that further spread widening is likely.

However, near-term default risk in the asset class remains low. First, issuers face few maturities over the next 12 months. Second, while many issuers’ fundamentals have been negatively impacted by rising input costs in 2022, most still have fairly strong cash balances and manageable interest expenses. Over 36% of U.S. high yield bond issuers had a coupon of less than 5.0% at quarter-end, compared to 16.0% at year-end 2019.10 Finally, quality (indicated by credit ratings) in the high yield bond market has increased over the last decade. Bonds with a credit rating of BB (the level just below investment grade) now constitute 53% of the U.S. high yield bond market, compared to 43% in 2012, and bonds in the lowest ratings category (CCC) currently make up under 11%.11

Looking forward, we believe yield spreads could expand from current levels if the U.S. economy enters into a recession, even if defaults don’t spike. During significant corrections in the U.S. high yield bond market in the last 25 years, yield spreads have typically ballooned to over 1,000 bps. (See Figure 5.) These wide yield spreads reflected default expectations that proved to be excessively pessimistic, so high yield bond investors that were able to deploy capital during the downturns were in a position to scoop up tremendous bargains. High yield bond spreads might not reach 1,000 bps this time around – as the average price in the market is already well below par – but history suggests that yield spreads might have plenty of room left to widen in this cycle.

(2) CLOs may offer attractive relative value, due to rising yields and structural protections.

Yields of collateralized loan obligations (CLOs) have increased markedly in the first half of 2022, offering what we believe to be significant compensation for credit risk. BBB- and BB-rated CLOs yielded 8.1% and 12.6%, respectively, as of June 30, compared to 4.9% and 8.5% at the end of 2021.12 Moreover, yield spreads ended the second quarter near the widest they’ve been since December 31, 2020. Notably, BB-rated CLOs were offering a premium of 497 bps over similarly rated high yield bonds, as of quarter-end, even though the probability of one issuer defaulting is greater than the likelihood of many defaulting at the same time.13

If interest rates in the U.S. continue to rise and remain elevated through 2023, some holders of the underlying loans may face liquidity issues, especially those in industries – such as technology – in which average leverage is high. But default rates for CLOs have historically remained low, even in challenging economic environments, including the Global Financial Crisis. This is partly because CLOs include structural protections that can provide a reasonable cushion in an economic downturn. In order for a typical BB-rated CLO to incur losses, approximately 30% of the underlying loans would need to default. 14

However, during a broad market sell-off, CLOs often suffer significant mark-to-market losses, as investors seek to shed all assets perceived to be risky. But such a dislocation could present an attractive opportunity for disciplined investors, as prices typically decline far more severely than credit fundamentals.

In recent years, many direct lending funds have attempted to compensate for falling unlevered returns by increasing their use of leverage facilities provided by banks. However, as Oaktree has long noted, using leverage to produce adequate returns is a dangerous game. If a substantial portion of a direct lender’s return is tied to financial flexibility, then such an investor could be vulnerable in an economic downturn, as such flexibility often declines at the worst possible moment.

If a market dislocation occurs, banks could potentially pull private lenders’ leverage facilities. Lenders would then need to raise liquidity and would likely sell their top-performing assets that could still command a reasonable price. These lenders might then be left with poorly performing assets and still have significant leverage to repay.

Such an environment could benefit private lenders who have taken a more cautious approach to leverage. They might be better positioned to provide rescue financings or other solutions at attractive levels, while also securing strong lender protections.

Figure 9: The Convertibles Market Is Now Offering Positive Yields and an Average Price Below Par 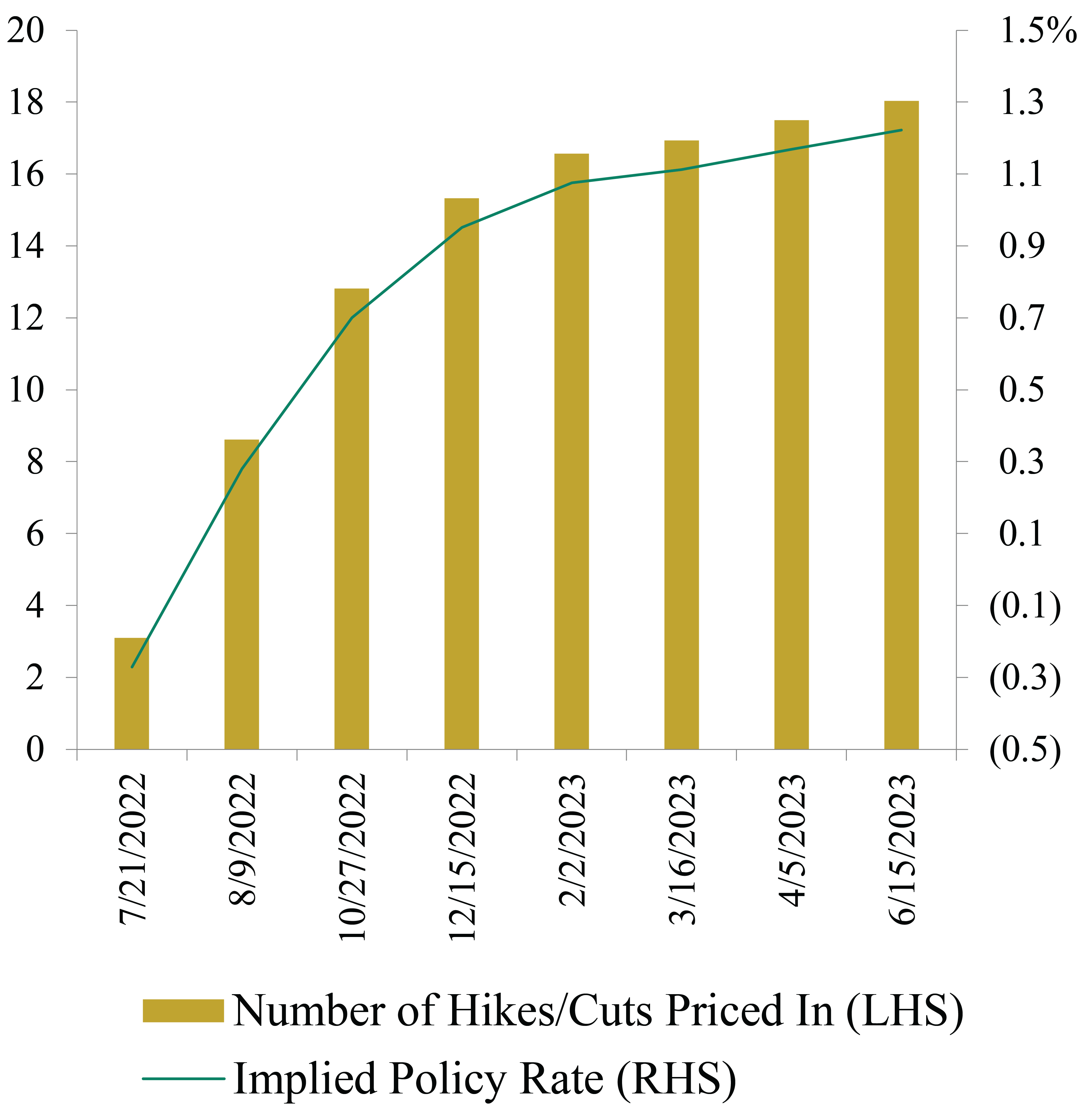 This document and the information contained herein are for educational and informational purposes only and do not constitute, and should not be construed as, an offer to sell, or a solicitation of an offer to buy, any securities or related financial instruments. Responses to any inquiry that may involve the rendering of personalized investment advice or effecting or attempting to effect transactions in securities will not be made absent compliance with applicable laws or regulations (including broker dealer, investment adviser or applicable agent or representative registration requirements), or applicable exemptions or exclusions therefrom.

This document, including the information contained herein may not be copied, reproduced, republished, posted, transmitted, distributed, disseminated or disclosed, in whole or in part, to any other person in any way without the prior written consent of Oaktree Capital Management, L.P. (together with its affiliates, “Oaktree”). By accepting this document, you agree that you will comply with these restrictions and acknowledge that your compliance is a material inducement to Oaktree providing this document to you.

This document contains information and views as of the date indicated and such information and views are subject to change without notice. Oaktree has no duty or obligation to update the information contained herein. Further, Oaktree makes no representation, and it should not be assumed, that past investment performance is an indication of future results. Moreover, wherever there is the potential for profit there is also the possibility of loss.